Father Alessandro and the young group

Salta, Argentina overwhelms with its extended areas, we traveled kilometers and kilometers without leaving the capital city, and the coincidences of life made us camp right next to one of our silent heroes. In spite of the signals received we were asleep or distracted. We were waked up by the music of the guitars and the voices singing “…take me to where the people need your Word…”, but we didn’t take the hint. Talking to the owner of the camping site and telling her what we were doing, without hesitation she introduced us to Alba, a biology professor who was with the kids who were singing earlier that day.

On the other hand, we were invited to meet Father Alessandro, a charming Italian from Rome who invited us to stay the night over the phone. The more we were getting closer to his parish and away from the colonial Salta with the park ‘9 of July’ and impressive houses, the more we were being immersed in a harsh reality with the most humble settlements of the city.

We invited Alba to share some mates while introducing each other, in just a  few minutes we were astonished by her work, her daily small contribution. During the mornings she works at a Public School as a Biology teacher and during the afternoons she works for God: teaches catechism, brings the Holy Eucharist to the sick, leads a children’s choir or visits a Home or a Hospital. Her name (Alba=Dawn) fits her perfectly, when she starts to talk is like there is more light; she is simple, very warm and speaks frankly. She tells us that sometimes God squeezes in her classes and she would invite the children to visit a Home or a public dining, so they would see other realities, while sowing the interest in helping others. Sometime in the future, sooner or later, this experience will make them more inclined to do charity work. She highlights: “when you open the doors of a classroom, you open the doors of many souls and hearts which may see that there are more to facebook, fashion and all that drowns them. When I invite them to see this ‘other world’, a strong impact is produced on them, which wakes them up, makes them see another reality and moves them forever.” Usually during holidays, Sundays and on vacation period she goes with young people to visit Seniors Homes, public children dining places at least once a month. Many old people consider them like grandchildren and vice versa creating deep bonding between them. Sometimes they even go to visit them alone or bring a friend or sibling, spreading their joy of helping others.

She tells us that one day she was training running up the San Bernardo mountain, where there is a Via Crucis (stations of the cross); at the station where Veronica dares to help and clean Jesus face with a cloth during his ascent to the calvary, she stopped abruptly, forgot keeping track of her training and went down crying. She suddenly realized: “This is what I want, all my life, help Him, live for Him.” She reminds us: “that even if her life choice ‘meant leaving behind her father, mother, brothers and sisters, houses and properties’ to serve God, He returns you a 100% of ‘father, mother, brothers and sisters, houses and properties’ that you have left. He fulfills His promise, He fills your life, heart and you find everything in Him; must be similar to what is happening to you guys; I’m very happy, truly happy. I find abundance in God; is like they say: if you experience peace and joy in your heart is because what you are doing is from God.”

When we finally reached the parish of Father Alessandro, we met a big Italian man glad to welcome us, calm but very active at the same time. Obviously the first question was ‘what an Italian priest from Rome is doing here in a very humble neighborhood at the outskirts of Salta?’. He tells us that by coincidence he met a priest from Salta, Argentina at his parish in Rome. When this priest returned home, he came to visit him; slowly he fell in love with the place and dedicated his Christmas vacations to come to Argentina bringing donations and other Italians wishing to live a different experience (people between 15 and 71 years old). In the meantime, he continued to be a “borrowed” priest helping out in South Africa, Amazons and Peru. With each visit to Argentina his heart became more attached to Salta, until the request made by the Bishop of Salta to Rome became a real thing. Alessandro remembers with great joy the day he was told that he could stay in Salta, in the Parish ‘María Medianera’, he wasn’t expecting it and was a “dream that came true”.

Since he came to the neighborhood, lots of things changed. There is a life at the Parish, everyday Mass, Sacraments, Catechism and guitar, choir and computers lessons. Thanks to many Italian donations and  a system of ‘long distance sponsorship’, they could cover different needs like school expenses, office supplies, shoes, books and even construction materials to build additional rooms to very precarious houses. The living experience of the missionaries who have crossed the Atlantic Ocean and Alessandro’s practical way of transmitting the reality of the neighborhood named Islas Malvinas-San Silvestre with his stories and short films, made it possible to have the financial help of many Italians. This is how the Parish became a meeting place of the neighborhood, building a spacious Dining Room (the former was too small) and creating the Training Place for the younger ones, where they play and receive help with the homework. Close to 70 children, including one or two older people eat at the Dining Room and they bring home a plastic bottle of chocolate milk to share with their families. They could also complete a big barn where training classes are given and they can play basketball, volleyball, soccer and have multitude meetings of the community. They needed a big room with a roof to be able to meet and now this is posible. Alessandro counts with the help of a young Italian lady, Giulia, who guides the youth group; and a group of religious lay people who help with the Catechism and in the mission of the neighborhood. Now the work is getting more difficult, because the donations from Italy are beginning to disappear due to the tough economic situation of that country. But Alessandro doesn’t give up, he has much to do and capitalize what has already been done.

Alessandro tells us that it wasn’t easy at the beginning. Even if he was a familiar face, it was an ant’s work to recover the community; with the lack of priests there was only a weekly Mass, almost none Parish life and a big development of other sects and spiritual movements, like it usually happens in marginal neighborhoods. With all his might and taking baby steps, he started to conquer back the community, infecting with that Love for God that becomes tangible in the Love for others. He really became one of them to live among them, he left his life in Rome much more comfortable, to serve God where He was asking him to. He admits with a touch of sadness: “I feel much more like a priest here than what I felt in Rome; here they look for you to get a confession, to celebrate Mass, give blessings, talk, for the real functions of a priest, over there everything is more bureacrocy , more problems related to Money and papers. The good thing is that here the lay people are stronger, maybe due to the lack of priests, and this helps me immensely”. He proudly informs us that after 5 years of living here, there are already 10 young students at the university; with all that this means in a neighborhood where it is hard enough to complete elementary education and so frequently they can’t even go forward in their studies.

The cultural Exchange of the Italians that visit the neighborhood and of the young ones that he could take to Italy makes it possible to see other realities and expand their horizons. The paternal figure is absent in the 90% of the cases, or when present it usually has alcohol problems, so it is hard to expect a future growth. To welcome international visitors makes them feel important, that someone may remember them on the other side of the world makes them feel valuable and not the last ones, the forgotten.

To be able to understand this better, we shared 2 days with Father Alessandro, who invites the young people with tasty spaghetti as a good excuse to let us get to know their situations. There are many who are already dads before they turn 18 and are fighting against alcohol, paco (base paste) or marijuana addictions. They ‘protect’ their interests in organized street gangs, becoming even more dangerous. They have temporary jobs and it is hard to get one, so their free time they spend it at the Parish where they can use the computers and stay in a safe and healthy environment and not in the street. It is surprising that he doesn’t have a private space for him only, except his bedroom. He shares the living room with the computers and whoever wants to use them, the same with the kitchen. He eats with someone almost every lunch, so he makes sure that they eat, because in their home the priority is the little ones. We experienced the flooded streets, mudded areas and the daily water and electricity cuts that happen from noon to early evening. This is how Father Alessandro fights from his place, next to them, trying to share this Love of God with his community, reminding them ‘the last will be the first ones’.

Some videos of the kids at the neighborhood by Father Alessandro: “The Man of the House” and “Dancing Queen“ 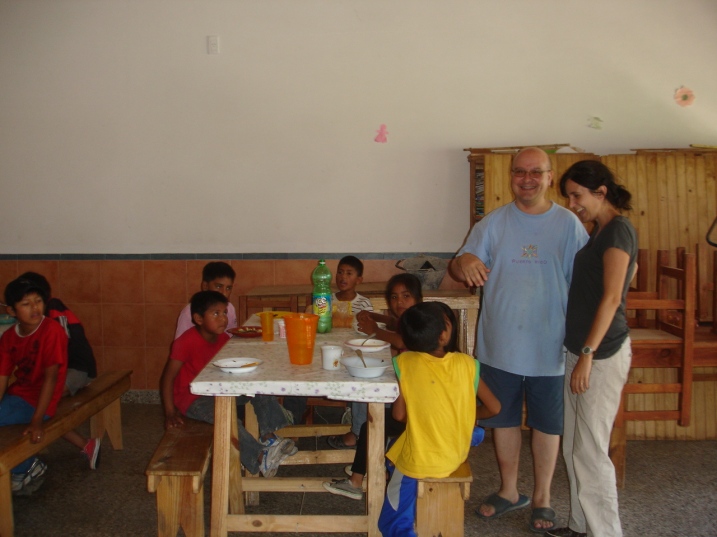 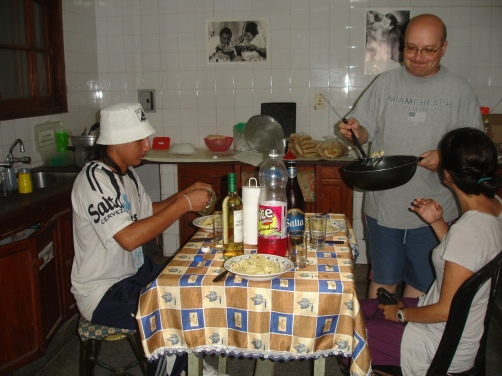 Please share with us your comments or impressions Cancel reply